← more from
Awesome Tapes From Africa
Get fresh music recommendations delivered to your inbox every Friday.

Our Garden Needs Its Flowers

by Jess Sah Bi & Peter One 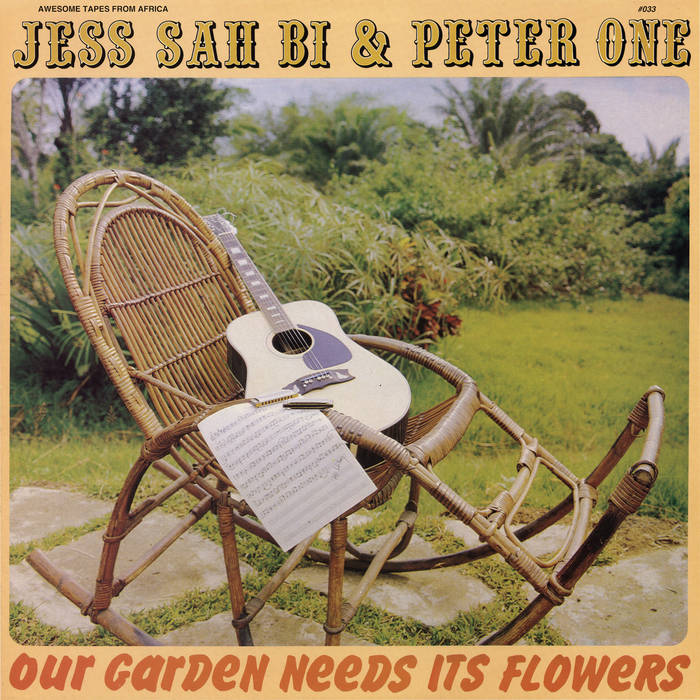 David Orr I'm thankful that this has been reissued! A stunner front to back, thank you for this beautiful music, Jess and Peter! Favorite track: Apartheid.

GaZ Apartheid is my favourite song of 2018!

In the 1980s, Abidjan’s Jess Sah Bi & Peter One became one of the most popular musical acts in not just the Ivory Coast (Côte d'Ivoire), but broader West Africa, eventually performing with a full band to stadium-sized audiences at home and throughout Benin, Burkina Faso and Togo. Although they’d been popular radio and television performers for several years prior, the catalyst for Jess and Peter achieving this new level of stardom was their debut album, Our Garden Needs Its Flowers, recorded and released in 1985.

In contrast with the heaving funk, disco and reggae sounds of the day, Our Garden Needs Its Flowers was a lush fusion of traditional Ivorian village songs and American and English country and folk-rock music. Jess and Peter sang in French and English, delivering beautifully harmonized meditations on social injustice and inequality, calls for unity across the African continent, an end to apartheid in South Africa and the odd song for the ladies, all set against lush guitar riffs, rustic harmonica and rollicking feel-good rhythms.

Wrapped up in the sort of pop sensibilities that see YouTube rips of their music littered with nostalgic French-language comments reflecting on a time now some thirty-plus years distant, Awesome Tapes From Africa’s reissue of Our Garden Needs Its Flowers memorializes the best intentions of the golden years before the Ivory Coast’s social, cultural and political landscapes transformed radically. Surprisingly, it’s the first time the album has been re-released in a high-fidelity, legally licensed form. (Currently available versions for sale on digital retailers and posted on YouTube are bootleg recordings of a crackly LP; no one has sent the artists royalties for these sales.)

When he was a young man studying at the University of Abidjan, Peter used to relax by playing guitar and singing in his dormitory kitchen. In 1979, his neighbor Emmanuel Gore Bi Tah commented that Peter played and sang in a very similar style to his uncle, Jess. In Peter’s words, “Jess’s nephew called and said, ‘You guys are doing the same thing.’ We went from there.” “It was a perfect fit,” he says.

As well as French and English, Jess and Peter spoke Gouro (a Mande language). They had the shared experiences of loving and drawing inspiration from the traditional and ceremonial songs they remembered their mothers singing in their respective hometowns of Barata and Ono. In addition, hearing imported country and folk-rock music over the radio in the early ‘70s was a lightbulb moment for both of them. Jess recalls DJs playing Kenny Rogers, Don Williams and Dolly Parton on the radio in the morning, while Peter notes the significant presence Simon & Garfunkel, Cat Stevens, Crosby, Stills & Nash and Creedence Clearwater Revival had in his listening life. They were avid readers of international and local music magazines Rolling Stone, Salut Les Copins, Hit Parade and Podium and they would visit downtown Abidjan music stores Le Studio 33 and Dicotheque de L’Hotel Ivoire to scour the record racks, looking to dig deeper.

As they grew together, their sound blossomed into a blissful fusion of the traditional music of their childhoods, and the English and American sounds they were wholeheartedly embracing. “This was country music made in the Ivory Coast,” Jess says. “We knew we couldn’t do it just like they do it in the U.S.”

Country music and folk-rock weren’t very popular with the general public. But interest was bubbling up within the growing student population, who connected with the protest sentiments expressed by many English and American artists of the era and loved the sound as well. “It’s very nice music, with very nice harmonies, and it’s different from what you hear every day,” Peter says. “The language was a big barrier though. You had to learn English to understand the songs, and the students were the ones learning English.” Having access to education along with their awareness of social and political inequality and injustice made students the perfect audience for folk music in Ivory Coast.

Peter had only been in Abidjan for a couple of years when they first met, but Jess had been living in the Ivory Coast’s sprawling economic capital since his teens, when he moved there to attend high school. Although he’d sang since he was a child, and picked up bass guitar during school holidays, Jess didn’t get serious about music until popular Ivorian singer Wedji Ped performed at his high school.

In the late ‘70s, Jess’s passion for music led to him performing on local television and radio shows like Tremplin, where he was well-received. “My father was a very popular dancer (traditional Dwa, Gahou, and Bilo styles) in the village, so I had been dancing from a young age,” Jess says. “I liked being on stage, and being seen.”

Jess’s progress as a songwriter and entertainer dovetailed with the pursuit of another childhood passion: cartoons. He became the first political cartoonist in the Ivory Coast and went on to draw for more than 30 newspapers and magazines across West Africa and France. Between music and cartoons, by the time he met Peter, Jess was very well connected within the local media landscape. As Jess progressed professionally, Peter graduated from his studies, and in 1980, became a high school history teacher.

“Jess was already very accustomed to playing on television and radio when we met,” Peter says. “Once we started playing together, he went back to see those guys. They started recording our songs, having us play, and broadcasting us over the radio and television for a few years.” With the support of prominent radio broadcasters Tony Kouassi, Doh Ouattara, Balliet Bleziri Camille and Assi Akawa, along with television directors Koffi Abdul Karim and Anoh N’gouan Steve, and television hosts Georges Tai Benson and Roger Fulgence Kassi, Jess and Peter began to grow a receptive audience across the country beyond the student demographic.

Well-traveled Ivorians were shocked to see a local duo playing country and folk-rock with international flair. Jess and Peter were often told they should head to England or the U.S. In part, this can be credited to the late Don Bosco Beaufort, a student, singer and guitarist who sold Peter his first guitar when he was 17, and taught him the basics in Grand Bassam. “He was a great singer and guitar player, and very comfortable with rock and roll, jazz, blues, folk, and pop,” Peter says. “He was already in the mood of English and American singers. I think he got that from his father who traveled the world and had a huge music collection.”

In 1985, Jess and Peter were offered a record deal. They headed into Frenchman Jacques Bizollom’s legendary JBZ Recording Studio in Abidjan, the top recording facility in the Ivory Coast. Over two months, they worked with arranger Hugh N’guessan Santa, engineers Emile Valognes and Pamphille De Souza and a band of session musicians who eventually became their touring band to record the eight songs on Our Garden Needs Its Flowers. “We knew that we were doing something special,” Jess says. “Because of the television and radio, people were waiting on our album, and they really liked what we did.” “We expected the album to be a big success, but we could not have imagined how far it would go,” Peter adds.

After Our Garden Needs Its Flowers release, Jess and Peter’s profile lifted rapidly, leading to those stadium performances across West Africa. Their ascent was accompanied by critical acclaim from the local press, appearances at galas organised by Marie-Thérèse Houphouët-Boigny, the wife of the late Félix Houphouët-Boigny, the first president of the Ivory Coast and even a performance during the 1988 ECOWAS (Economic Coalition of West African States) summit in Yamoussoukro at President Houphouët-Boigny’s request. Jess and Peter’s run lasted until the early 1990s, capped off with the BBC using their song “African Chant” as theme music the day Nelson Mandela was released from prison.

In the early 1990s, Peter began to feel increasingly uncomfortable with the shifting political landscape in the Ivory Coast. After helping to launch the region’s first musicians union—with a focus on fighting music piracy—in 1995, he headed to New York to acquire the equipment and experience required to launch his own recording studio and record label. As the situation continued to deteriorate back home, he decided to stay on and moved to Delaware to take a nursing job, before moving to Nashville. In 1996, Jess headed to the U.S. as well. He spent time working odd jobs through New York, Orlando, Philadelphia, Washington, North Carolina and Baltimore, before settling in San Francisco.

In 2018, Peter continues to work in nursing, and play music in his spare time. He’s also established a home studio, recorded several unreleased albums, and helps local young musicians work on their songs. “Everyone in Nashville has a guitar, and everyone is a singer or songwriter,” he says. “I love it.”

Jess works as an instructor, teaching African musical styles to children, and often performs at public events and private functions. “These days, I mostly do gospel music,” he says. “I’m working on three different versions of my gospel album in English, French, and Gouro, and an acoustic album.” Outside of their solo endeavors, the duo continues to perform together on an irregular basis, most recently gracing the stage in New York in 2016.

In the 1980s, Abidjan’s Jess Sah Bi & Peter One became one of the most popular musical acts in not just the Ivory Coast (Côte d'Ivoire), but broader West Africa, eventually performing with a full band to stadium-sized audiences at home and throughout Benin, Burkina Faso and Togo. ... more

Bandcamp Daily  your guide to the world of Bandcamp